Patriarch Irinej of the Serbian Orthodox Church died after attending funeral of Montenegro counterpart who also had COVID-19. 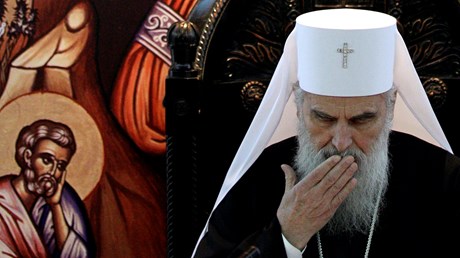 Church bells tolled and mourners flocked to light candles as the Serbian government proclaimed three days of national mourning for Patriarch Irinej. The 90-year-old leader of the Serbian Orthodox Church, who passed away November 20, became the world’s highest-ranking cleric to die from COVID-19.

Evangelical leaders in Serbia described him as “kind” and sincere in his dialogue with them.

The Orthodox lost a towering figure, who nurtured the church through the Soviet era.

“I knew the patriarch as a simple man, modest in his needs, and of strong moral character,” said Zoran Filipovic, an Orthodox priest who served on his staff.

“His greatest concern was the welfare of the church.”

It may have contributed to his death.

The patriarch was hospitalized with the coronavirus early in November, soon after attending the funeral of the head of the Serbian Orthodox Church in Montenegro, Bishop Amfilohije [profiled by CT], who also died from complications caused by COVID-19.

Thousands of mourners, most of them without masks, gathered at the November 1 funeral for Amfilohije in the Montenegrin capital, Podgorica, in violation of pandemic-fighting measures proclaimed by the small Adriatic state’s authorities. The burial turned out to be a superspreader event, with several high-ranking church officials and other attendees later testing positive.

After Amfilohije’s death and Irinej’s hospitalization, Serbian priests have started to appeal for their parishioners to take the deadly virus seriously. They had previously downplayed the threat from the global pandemic and largely ignored bans on large gatherings and preventive measures during prayers and other church services.