Jocelyne Khoueiry inspired over 1,500 Christian women to enlist during the civil war, then shifted her efforts from arms to knees. 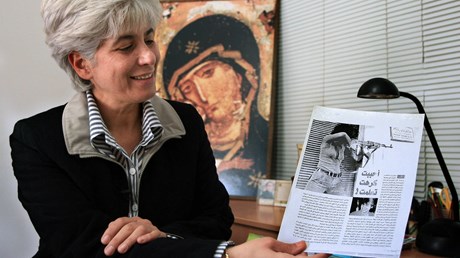 On July 31, Jocelyne Khoueiry passed away mercifully five days before seeing Beirut destroyed, again. A key player in the civil war that once tore the city apart, she spent the rest of her life trying to stitch it back together, and all of Lebanon with it.

The Beirut explosion on August 4 reminded many of the worst days of the 1975-1990 conflict. The Lebanese capital divided into a Christian east and a Muslim west, alternately shelled by militias and foreign armies vying for control.

But though far smaller in scale than the blast at the port, the deaths caused by Jocelyne’s 1976 hand grenade also shook the nation.

Born as one of two daughters in a Maronite Christian family of ten, Jocelyne grew up across the street from the Beirut headquarters of the Phalange.

Originally a Christian youth movement dedicated to an independent Lebanon, the Phalange took great offense at the state-within-a-state formed by the 300,000 Palestinians who were fleeing war with Israel. The 1969 Cairo agreement gave the refugees sovereignty to organize their own communities and continue the armed struggle, with the blessing—though not involvement—of their host nation.

The Khoueiry family provided some of the earliest fighters to the Phalange Christian militia formed in response, and a not yet 20-year-old Jocelyne enlisted with her brothers. In 1975, the civil war broke out in earnest, and several Lebanese Muslim militias sided with the Palestinians.

Jocelyne was not a practicing Christian; she preferred the Beirut nightlife. But on May 7, 1976, on a routine patrol on the roof of the Regent Hotel, she had a vision. She said the Virgin Mary appeared to her, and she saw herself kneeling in veneration. But she was also overcome with a sense …