Like the UAE agreement, Friday’s deal will normalize diplomatic, commercial, security and other relations between the two countries. 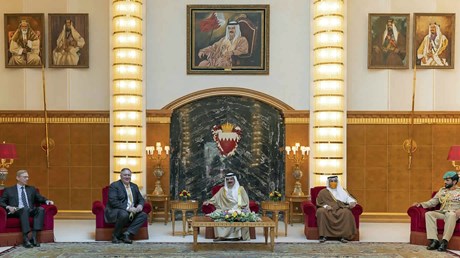 Bahrain has become the latest Arab nation to agree to normalize ties with Israel as part of a broader diplomatic push by President Donald Trump and his administration to fully integrate the Jewish state into the Middle East.

The announcement on the 19th anniversary of the Sept. 11, 2001 terrorist attacks came less than a week before Trump hosts a White House ceremony to mark the establishment of full relations between Israel and the United Arab Emirates. Bahrain’s foreign minister will attend the event.

“There’s no more powerful response to the hatred that spawned 9/11 than this agreement,” Trump told reporters at the White House.

It represents another diplomatic win for Trump less than two months before the the presidential election and an opportunity to shore up support among pro-Israel evangelical Christians. Just last week, Trump announced agreements in principle for Kosovo to recognize Israel and for Serbia to move its embassy from Tel Aviv to Jerusalem.

“This is a historic breakthrough to further peace in the Middle East,” Trump, Netanyahu and King Hamad said in the statement. “Opening direct dialogue and ties between these two dynamic societies and advanced economies will continue the positive transformation of the Middle East and increase stability, security, and prosperity in the region.”