Still, three-quarters of evangelicals say they agree with their church leaders on politics. 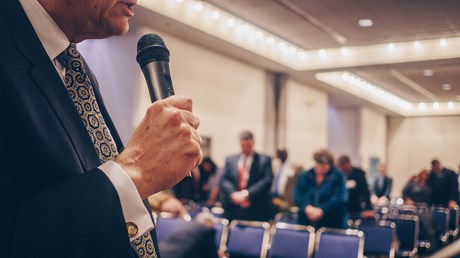 Churchgoers are most likely to say they don’t know whether their pastor is a Republican or a Democrat—and many preachers believe that’s a good thing.

The job of the pastor is to help churchgoers see that “neither party has a corner on true Christianity, and neither party is working out the values of Christ’s kingdom in its fullness,” said Bill Reidel, pastor Redemption Hill Church in Washington, D.C.

Reidel told CT he was pleased to see that almost half of churchgoers do not know their pastors’ political leanings, but he would like that percentage to climb even higher. While pastors have a right to their political opinions, Reidel said, pastors should, like the Apostle Paul in Corinth, be willing to set aside their rights for the sake of the gospel.

“To be a Christian doesn’t mean you ascribe to a particular secular partisan ideology,” he said. “I don’t think pastors should be fake about who they are either. It’s an entire grid of how we think about politics that ought to be changed.”

Some Christians have spoken up …

Source: Many Churchgoers Don’t Know If Their Pastor Is a Republican or Democrat

« Mac Powell Credits 'Miracle,' Prayers for Wife's Recovery from Aneurysm
Pray for Christians in Iran and Our Troops in the Middle East »