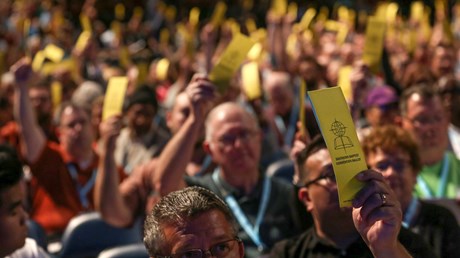 Southern Baptists approved a pair of proposals to strengthen their position against abuse—incremental changes to address the issue that has loomed large over the denomination and dominated conversation at this year’s annual meeting in Birmingham, Alabama.

The problem is a big one, embedded in a culture of neglect in their churches and institutions for years, Southern Baptist Convention (SBC) leaders acknowledged in a 52-page report released this week.

The most-anticipated business at its namesake gathering came on Tuesday evening, as 8,000 SBC messengers voted to add a bylaws line and new committee structure to deal with churches that mishandle abuse.

Under its existing policy, the SBC can opt to cut ties with churches that show a disregard for victims of abuse, since caring for the abused comes up in its required SBC statement of faith, the Baptist Faith and Message.

But faced with dozens of accounts of abusive pastors and cover-ups—most prominently reported by the Houston Chronicle this year—the nation’s largest Protestant body wanted to make that stance clearer and name abuse in its bylaws as grounds for being deemed “not in friendly cooperation” with the SBC.

The move passed by an overwhelming majority, yellow cards flashing across the arena, but will require another two-thirds majority vote in 2020 before the language is amended. (The new addition would also name racism as another violation that could cost a church its affiliation, as has happened in a couple of recent cases already. The SBC previously voted in favor of a line indicating affirming homosexuality as an example of a church violating the statement of faith and “deemed not to be in cooperation with the convention.”) …