Amid funerals and fears after ISIS-linked attacks, Christian leaders across the island explain how they are guiding the faithful on mourning and Muslims. 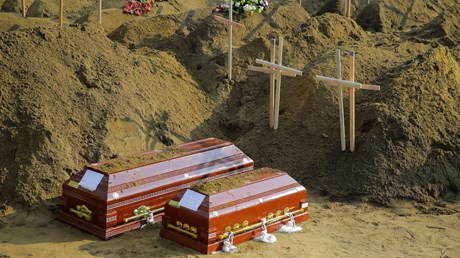 In most Sunday schools, the question is an academic exercise.

“How many of you are willing to die for Christ?” asked the teacher on Easter morning. Every one of the children dutifully raised their hands.

A few minutes later, the Sri Lankan class descended to Zion Church’s main service, passing through an outside courtyard where a stranger was speaking with church leaders. He had discovered there was no Easter morning Mass at the nearby Catholic church in Batticaloa, and was wondering when the service would begin here. He asked about the healing service.

Observers report he was sweating profusely. A pastor invited him to take off his backpack. Then, an explosion—many inside thought it was the generator.

Half the children died on the spot.

“All the children had responded [to their teacher’s question] by putting their hands up, and signalled their fresh dedication to Jesus by lighting a symbolic candle,” recounts a seminary leader [full testimony below]. “For so many of those children, it would be their final act of worship.”

In total, at least 26 worshipers—including 16 children—were killed and 100 injured at Zion, a charismatic congregation in the Fellowship of Free Churches in Sri Lanka. Two Catholic churches in and near Colombo on the island nation’s opposite coast were also attacked by suicide bombers that morning, along with three hotels. The death toll currently stands at 253, revised down from 359.

But this is not the only Christian tragedy.

Sri Lankan authorities have now arrested 76 local Muslim extremists and one Syrian, placing the blame on the National Thowheeth Jama’ath (NTJ) movement. ISIS has claimed responsibility, calling it revenge for …

Source: Sri Lankan Sunday School Was ‘Willing to Die for Christ’ on Easter. Half Did.