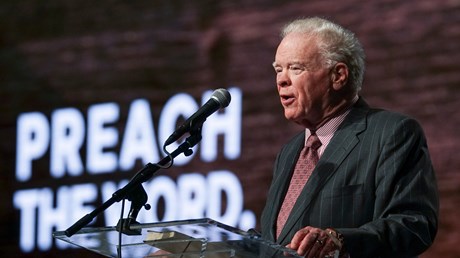 Paige Patterson will no longer preach an honorary sermon at the annual meeting of America’s largest Protestant denomination this month.

The figurehead of the Southern Baptist Convention (SBC) was slated to preach the high-profile “convention sermon” in Dallas on June 13, but he released a statement this morning addressing the controversy that’s surrounded him the past several weeks and announcing his plans to skip the convention:

In a few days, for the first time in 66 years I will not attend the annual meeting of the Southern Baptist Convention—having begun attending when I was nine. As many of you know, I was elected in 2017 to deliver the 2018 annual convention sermon, but I have now respectfully requested to be released from this high privilege because I do not want my role as a preacher to detract in any way from the important business of our convention and because my desire is to work toward biblical harmony at our annual meeting. Many messengers have implored me to carry out this assignment, but this convention is not about me, and I have every confidence that this decision is best and right.

Had he not backed out, delegates would have had the opportunity to vote to replace Patterson with an alternate speaker—a possibility that denominational leaders feared would be a distracting and damaging start to the meeting’s focus on evangelism, baptisms, and other matters.

The news of Patterson’s abdication came a week after the chair of the board of Southwestern Baptist Theological Seminary (SWBTS) revealed last Friday that Patterson lied to trustees about a rape allegation that came before him at another seminary, withheld documents from his previous presidency, and referenced …

« Police Donate House, Food to Homeless Family Living in Car
Fewer Couples are Marrying in Churches. Does it Matter? »